Opioid Use in Senior Living Communities

What is your facility doing to combat this risk?

Almost daily, you hear about it from a friend, see it on the news or read about it on the internet: another death as a result of a drug overdose. This scene, unfortunately, is playing out throughout the United States, even in senior living facilities. Often times, when you think of a drug addiction or overdose, illicit drugs like heroin, cocaine or methamphetamine may come to mind. Addiction and overdoses from prescription opioid painkillers, however, are becoming ever more prevalent.

The sale of prescription opioids in the U.S. nearly quadrupled between 1999 and 2014, according to the Centers for Disease Control and Prevention. The agency estimates that providers wrote 259 million prescriptions for painkillers in 2012. In 2014, 61% of the more than 47,000 overdose deaths that occurred were related to some form of opioid. These statistics are so alarming that many authorities consider opioid use a national emergency.

Think about the impact this could have on your facility.

Falls are more likely for seniors on opioids, significantly raising their risk for potentially devastating fractures. "A common example of a drug-disease interaction would be someone with mild cognitive impairment," according to Dr. Caleb Alexander, co-director of the Johns Hopkins Center for Drug Safety and Effectiveness. When a person with this condition gets an opioid product, he says, it increases the risk for confusion, falls and other adverse events.

Unfortunately, addiction doesn’t just impact the young. Seniors are also at risk of becoming addicted to opioids. Some common factors that contribute to opioid addiction in seniors are: 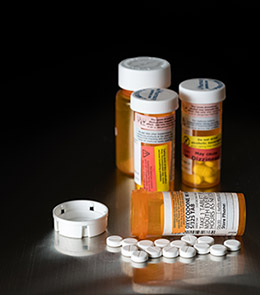 Dr. Andrew Kolodny, executive director of Physicians for Responsible Opioid Prescribing and chief medical officer of the Phoenix House Foundation said, “People addicted to opioids really believe the drugs help their pain because they feel so awful - and anxious - if they don't take them. They're feeling agonizing pain [and] if they take the opioid, the pain goes away. They believe the opioid is relieving their underlying pain problem. What's probably happening is that the opioid is treating their withdrawal pain."

You may assume that it is easy to identify someone who has a drug addiction problem. However, it is not always as simple as it seems. Take a look at the following symptoms:

When you see some of these symptoms you might think they are common side effects of medications offered to your residents. Unfortunately, they are also some common indicators of opioid abuse.

Opioid Management Controls for Your Facility

You might be thinking, "I have controls in place at my facility already, or we haven’t had any issues regarding opioid use." Even so, challenge yourself to review your practices and protocols regarding medication distribution at your facility.

The National Safety Council has concluded that healthcare facilities, including nursing homes and assisted-living facilities, can implement safety measures to control the risks associated with opioids. Some actions you can take include:

For more information on the opioid epidemic visit:


If you have additional questions regarding opioid use in senior living facilities, call Risk Control Central at (800) 554-2642, ext. 5213, or email riskconsulting@churchmutual.com.