Home » About Us » Company History

In 1897, seeds of optimism were being planted in the United States. Four years of economic depression were ending, and like plants ready to sprout from a burned forest, so too were rising hopes that would lead this country into a decade of prosperity.

Church Mutual Insurance Company traces its origins to that year of pioneering optimism. The same year the company opened for business:

In Merrill, Wis., a handful of progressive-minded pioneers were fueled by the same optimism and appetite for progress. By some standards defying church convention, they opened what would become today the nation’s leading insurer of churches, then called the Wisconsin Church Mutual Fire Insurance Association. Their sole mission was to provide low-cost insurance to congregations, pastors and teachers against losses by fire and lightning.

The company’s founders were 10 men who brought with them a mixture of backgrounds and personalities:

As several accounts credit, it was Daib who brought these players together. If he handpicked the men, he did so from among some of the most progressive in the community. Fehland and Thielman, in particular, were noteworthy. In addition to their work in local politics, they were principal stockholders in the Merrill Telephone Company and were instrumental in helping to bring telephone service to the area during this same era.

It is Daib whose role in the company’s development was particularly progressive and daring, considering the times. Reverend Alden Beversdorf, once pastor of
St. John Lutheran Church, explained: “He was treading on thin ice at the time. Insurance, in a sense, is gambling,” he said. “Gambling on the fact that . . . your church might burn down . . . and you can collect money on it.”

The church saw gambling as taboo.

Most churches still depended on their congregations to rebuild in case of a fire. And fires did occur frequently in this era when buildings were heated by wood- and coal-burning furnaces. Chimneys were not always cleaned regularly. Sparks ignited. Accidents happened. “I’ll bet a surprising number of fires occurred on Saturday nights,” Pastor Beversdorf suggested, noting that it was common for a church member to begin stoking the fire Saturday night in preparation for Sunday services. Such fires often destroyed not only the structure but the capital resources of a church. Some never recovered.

Realizing that not having insurance could be more of a gamble doubtlessly helped change the tide of public opinion, and by 1897, there was a small, growing market for church insurance.

Daib knew all about church fires. His experiences as a young man affected the way he saw them.

Born to a minister in Fairfield County, Ohio, in 1862, his family moved often at the calling of the church.

When he was 13, the family was living in Oshkosh, Wis., when the city suffered a disastrous fire. The congregation lost all its buildings: the church, school and parsonage. According to a family biography prepared by three of his children: “His father’s books and some household goods were saved because some of the members came with wagons and took them to the shore of Lake Winnebago. This fire and its consequences were to have a lasting influence upon young Herman Daib and provided a motivation for the organization of the Wisconsin Church Mutual Fire Insurance Association.”

The family’s personal losses were not all that disturbed Daib. According to the biography, “he also remembered that because this fire was ‘newsworthy’ and spectacular, the appeal of the congregation for help in rebuilding brought them more money than they had lost in the fire. On the other hand, congregations less well-known and with fewer resources among their members received a mere pittance. This offended his sense of fair play.”

Further reinforcing these feelings was yet another fire (this one at Wittenberg, Wis.) which destroyed a new Lutheran academy just six months prior to Daib’s arrival there as a young minister. During his time at Wittenberg, he saw the use of insurance money rebuild a “bigger and better” facility, which became the Martin Luther Orphans Home.

It was in Wittenberg where Daib started his ministerial career. Part of his work was as a circuit rider. By horseback (sometimes by railroad handcar), he would visit his multiple small-town congregations from Antigo, Wis., to Watersmeet, Mich. Many permanent churches are said to have arisen from his work.

He settled in Merrill in 1888 as pastor of St. John Lutheran Church. He also drove by horse and buggy the back roads of Lincoln County, establishing additional churches and assisting absentee ministers.

He married just months before he arrived in Merrill. He and his wife Hermine had three sons, all of whom became ministers, and two daughters, both of whom became teachers.

Daib was 35 when the Wisconsin Church Mutual Fire Insurance Association was formed, though the idea must have been brewing in his thoughts for some time. It all came together in 1897. By then, Daib was well established in Merrill and his congregation and had developed the necessary friendships and capital resources to make his move. The economy was improving. The time was right.

The first office was opened above the Kluetz Drug Company at 1016 East Main Street. Reverend Daib was the first policyholder.

Daib chose not to involve himself in the day-to-day operations of the company. That was left to W. H. Dicke who remained as office manager for 48 years.

In 1901, the office was moved to a new building at 808 East Main Street. Then in 1927, with three employees, it was moved to another new office at 1004 East First Street. After several additions, it moved to its present location on the northeast edge of Merrill in 1977.

Daib’s work with the Wisconsin Church Mutual Fire Insurance Association was not terribly demanding because the company remained very small during his lifetime. He juggled his work at the association with the time-consuming duties as minister and with his presidency of the North Wisconsin District of the Lutheran Church — Missouri Synod.

As the demands of the synod increased, he eventually gave up his ministry at St. John but always remained with the association. He was association president for 34 of his 44 years with the company, leaving the position only upon his death. He was succeeded by L. J. Kohloff.

Daib died in 1941, and there are still members of the Merrill community who remember him. Formerly among them was Lilly Goetsch who assisted her husband in establishing the archives at the North Wisconsin District office in Wausau. In her 90s, she remembered him well. “I remember some of his sermons,” she recalled. “They were very good, doctrinal sermons. He preached with fervency. You could tell it came right from the heart.”

She said he had “a great missionary zeal” and was respected for his leadership ability. 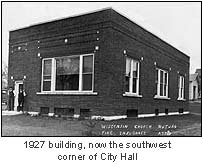 Working at the Ford garage across the street from the association’s 808 East Main Street building, Lilly said she watched Reverend Daib’s comings and goings from the office. As others have described him, Lilly said he cast an imposing image: serious and stern in demeanor and ramrod straight in posture. His trademark was a white bow tie, which his biography says were purchased by the gross and used by the family for bandages once discarded.

As serious and stern as his personality, so was his running of the association. Growth was slow and very conservative. It was a company built on cautious optimism.

When Reverend Daib passed away, Church Mutual was still known by its old name and had not yet approached its national status.

Since office operations were still being managed by W. H. Dicke, Reverend Daib’s death created no revolutionary changes in the company’s daily system. Dicke also was a hard-nosed conservative and ran the office accordingly. There is no indication that the new president, L. J. Kohloff, thought any differently.

On the one hand, Dicke’s conservative style helped establish a sizable balance sheet for the company, which future president Walter W. Schuster would credit as “sufficient to become the springboard for expansion.” On the other hand, he was managing a company entering its adolescence. It was a company chomping at the bit for freedom, ready to experience what the world had to offer. It was ready for the arrival of some new faces and some fresh ideas.

Click to read more: "A new generation pushes Church Mutual to the top."